As we reported, the core app updates for Mail, Calendar, People, and Messaging are available a little earlier than tomorrow, that is, they’re ready to go right now.  If you don’t see them in the Windows Store, from the settings (right click or swipe in from the right), click on “check for updates” and you should be good to go.

Just a couple of notes and first impressions: although Messaging was left off the list in today’s announcement of the updates, it did in fact make it to the party and appears to have received a bit of a makeover of its own (although we have to admit we hung on to Messenger and then switched to Skype, and haven’t done much with Messaging except try to turn it off).  Like all of the core apps, big, clean, and bold are the watchwords, so much so that using the apps feels like using one of those giant pencils from first grade (do they even have those anymore?  those giant black pencils with no erasers that felt like they were cut out of a single tree?  the ones that probably held enough lead to close down a whole school?).  Maybe it’s because we’re still on a desktop machine with dual monitors and value real estate more than touch, but Microsoft’s approach with Metro/Modern feels more like dumbing down than cleaning up.

Still, the apps are an improvement, and Mail looks like it may just be usable: 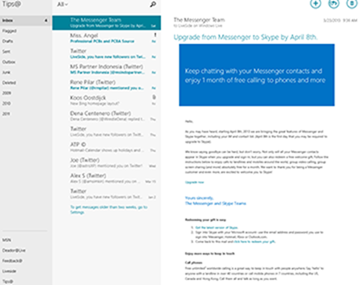 It does a good job on those endless messages from The Messenger Team, anyway, and you can easily switch between accounts in the lower left corner.  We’ve yet to go through and check out all the changes that Brandon LeBlanc listed this morning, but we might just be tempted with this one.

Calendar does look nice, although the downside to following lots of people on Facebook etc. becomes readily apparent when you’re confronted with all their confounding birthdays: 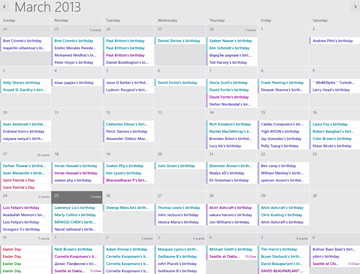 Who are all these people?  And how many times do I need to know that it’s Easter? (I know, I know, this is more of a config issue with me and my various social networks than it is a problem with Calendar, but still…).

The People app again is long on bold clean looks and somewhat short on usable information: what I want to know immediately when opening People is “where are my contacts” and “who is online”.  That information is buried a few pages down (or over, in this case), and I’m left with some breathless news about a Tweet I posted 3 days ago.  Again, I know.  I’m holding it wrong.

Still, the apps are coming along, Metro is here to stay, and taking the plunge and springing for a touch enabled device would provide a whole new perspective, and that’s only a matter of time.

For now, unlike the first round of core apps, these look like they just might be worth a shot.

What do you think?  Are you drawn back in to give Mail, Calendar, Messaging, and People another look?  Are you still clinging to Messenger and Windows Live Mail until they’re pried from your hands?  Is there still too much lacking to make these apps worthwhile?  Let us know in the comments.