One week ago, Microsoft announced that the 2013 version of Build, their developer focused conference that’s sure to feature lots of Windows 8, Windows Phone, and maybe even some Xbox news, will be held June 26-28 in San Francisco.

Now today, registration for Build is open for the first time, at register.buildwindows.com: 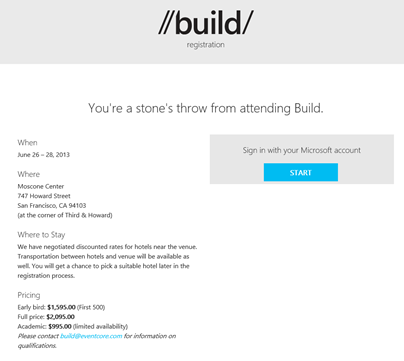 There’s a preliminary schedule up at www.buildwindows.com, too, and although it is short on details, there is a hackathon scheduled:

While the price for attending Build might seem high, it sounds like Microsoft has been prepared to spare no expense to give its developers the tools they need to create apps for a host of new platforms.  At Build 2011, as Microsoft employee and blogger Raymond Chen revealed yesterday (via Neowin), the cost of the giveaway (a prototype Samsung Windows 8 tablet) outspent the cost of the conference:

Now about the devices themselves: They were a very limited run of custom hardware, and they were not cheap. I think the manufacturing cost was in the high $2000s per unit, and that doesn’t count all the sunk costs. I found it amusing when people wrote, “What do you mean a free tablet? Obviously they baked that into the cost of the conference registration, so you paid for it anyway.” Conference registeration was $2,095 (or $1,595 if you registered early), which nowhere near covered the cost of the device.

Looking forward to June & attending & speaking at //build/ conference in S.F.Chance to hook up with Mix alumni etc. buildwindows.com

We’re all signed up, and looking forward to seeing you there.  Let us know if you’ll be attending, and we’ll let you know about any tweetups or Blogger Bashes once they get organized!