We learn that Surface China can only be purchased in China mainland. The differences between Surface China and Surface Pro normal are listed below:

(To be clear, Microsoft uses the name Surface China under Surface Pro category on its website. ) 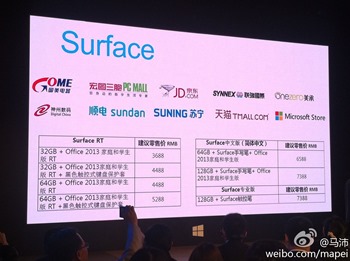 According to the data from Microsoft China store on Tmall, over 2071 Surface Pros have been sold on Tmall, and Surface Pro 128GB was sold out in an hour while the store keeps replenishing supplies. Currently, we don’t know sales numbers from other retailers. (via LiveSino)