Is the World Ready for an Always On Xbox?

Despite the fact that Sony has already announced their next-generation console, the Playstation 4, Microsoft remains as tight-lipped about the new Xbox as ever. Outside of the acquisition of the (as of this writing) still unpopulated XboxEvent.com domain, virtually nothing new has come to light about Durango; until yesterday. While it is Microsoft’s policy not to comment and rumors and speculation, Microsoft Studios Creative Director Adam Orth, according to gaming site CVG.com openly defended the possibility of an always online console. On twitter, Orth bluntly stated that “Every device is now ‘always on’. That’s the world we live in.#dealwithit”.

Below follows a screenshot from his (now-private) twitter, of the tweets in question: 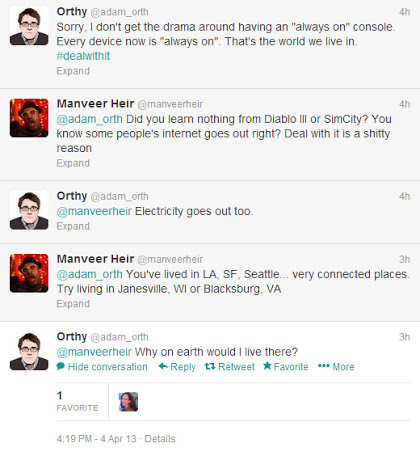 Does this infer that the new Xbox will in fact require an internet connection, as previously reported? Whether Orth was speaking unofficially or not, it certainly lends its fair share of credence to earlier rumors. While this in and of itself is by no means a confirmation, it has raised more than a few eyebrows, adding speculative fuel to the one Durango rumor that will not die. If true, the new Xbox would be one of the very first home gaming consoles that  requires always on connectivity. The prospect of a constantly online Xbox is unprecedented, and, as many a stagnated PC game launch has shown, may lead to potentially dangerous consequences.