It’s already been 6 months since the first Surface RTs appeared in the marketplace, and ever since then, consumers in markets around the world have been asking to be able to purchase a Surface RT or Surface Pro in their markets.

Today, in a post on The Surface Blog, General Manager for Surface Brian Hall (who used to be the GM for Windows Live, hey Brian!) announced that both Surface RT and Surface Pro are indeed coming to new markets:

Surface RT will launch in Malaysia on April 25th, in Mexico by the end of May and in Korea and Thailand in June.This expansion will result in Surface RT being available in 29 markets. For those that are counting, it’s already available in Australia, Austria, Belgium, Canada, China, Denmark, Finland, France, Germany, Hong Kong, Ireland, Italy, Japan, Luxembourg, the Netherlands, New Zealand, Norway, Portugal, Russia, Singapore, Spain, Sweden, Switzerland, the United Kingdom, and the United States.

Microsoft has already expanded Surface sales, and earlier this month began selling Surface in China, as we reported, and coincidentally, made it into today’s Surface Blog post in a highlighted tweet: 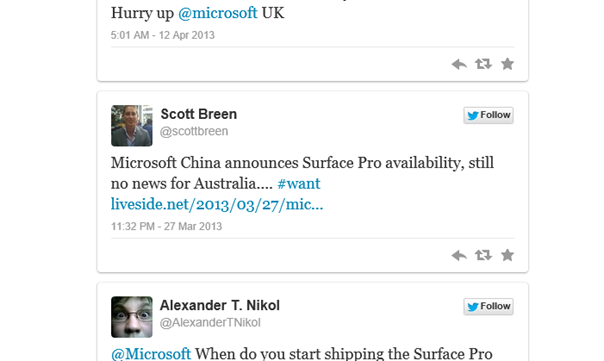 (always fun to see your name “in print”!)

We’re still not hearing any official Surface sales figures, although Matt Rossoff, at CiteWorld.com,  did dissect Microsoft’s latest earnings report to show that the Surface is doing exactly what Microsoft intended it to do, that is increase the margins on Windows/Surface sales at a time when PC sales are struggling.

Are you looking forward to picking up a Surface when it comes available to you?