Today, on the Bing Search blog, Bing Director Stefan Weitz posted on some thoughts he and his team had while watching last week’s Google I/O keynote.  Weitz starts off by summing up what he and his team surmised was a core takeaway from the keynote:

But what Google I/O really made clear to us was, under all the technophilia, Google’s main focus is on monetizing its users’ data. They will be paying more attention to your location, analyzing your photos and turning them into animated gifs and they’d like some credit for their innovations while rarely mentioning that all this personal data collection gives them more opportunities to show you ads.

He goes on to mention that this may not seem to bother at least some Google users:

You know, for some folks – the bargain they strike with Google is fine. Just like personal space in an elevator, people have varying degrees of tolerance for how close another person gets to them, and varying degrees of comfort when that person is actually a corporation not wearing deodorant.

… and then goes on to present an infographic (of course) and some Microsoft funded research study data that purports to show that Google users are getting “Scroogled”, if they only knew.  Weitz summarizes:

But I think it’s kind of interesting, that a company that talks a great deal about the possibilities presented by Internet innovation, the open source movement, and freedom of speech, has an ecosystem play that continues to tie their users down to one identity, one technology system, and to an ad-propelled company that can delete what a G + user says without appeal. When you sign onto Bing, you can sign on with Microsoft or a Facebook account. We don’t have to know everything about you to give you a great search experience. And yeah, our maps work, too.

The blog post is, of course, another round fired off in what appears to be Bing’s approach to marketing these days: scare tactics about big bad old Google, and how that big bad wolf is going to come and blow your house down. 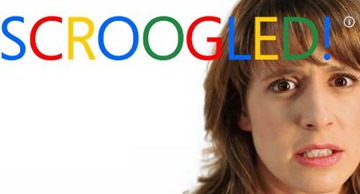 Now, as we said before, we’re no fans of Google.  We’ve been using Bing, pretty much exclusively, since back when it was MSN Search, and to be honest, it’s made some pretty great strides in that time.

But Google is about a lot more than just monetizing your data, although yes, that’s a big part of it, and as Weitz points out, probably has a different focus than what Bing offers you.  However,  what Weitz fails to mention is that Google is also constantly innovating (and yes, it’s had some failures and some flops along the way, but also some pretty truly amazing innovation, too).  Take Danny Sullivan’s post today on Google’s “conversational search”, which was introduced at Google I/O and went live today on Chrome:

I’m 17 years now into writing about search, and I’ve seen all types of things that have promised to revolutionize the space, especially products that trot out words like “natural language” and “semantic search” but fail to deliver.

Conversational search has natural language, semantic search and more built into it, and while it’s far from perfect, this really is one of those significant changes that makes even a “seen it all” person like me sit up and take notice.

What Google is doing is hard, and yet when it works, it feels natural, easy, like it should be.

In the meantime, even though Microsoft bought TellMe Networks way back in 2007, they’ve sat back and watched while first Apple with Siri, and now Google with conversational search have passed them by.  Oh yes, they’re getting quite good at making fun of their competitor’s successes, as today’s new anti-Siri ad shows.  Too bad they can’t seem to keep up with the innovation.

Google also introduced a completely revamped maps experience (and yes, they’re testing ads in it, according to Search Engine Land), and watched as some 10 million Android phones were sold last month.  People aren’t scared of Google, they’re flocking to it, and they’re doing so not because they’re getting Scroogled, but because they’re getting good value for the effort they’re putting into being a Google user.  People *like* Google, and taking potshots at them isn’t helping to get people to like Microsoft.

In the meantime, Bing hasn’t done much but bring us Scroogled ads and spin campaigns.  Yes, there has been some news about further Facebook integration, but be honest, have you ever actually used the Facebook integration features of Bing?  What happened to Bing Maps, for example?  Apparently Nokia and Microsoft can’t decide who owns what, and are letting Google run completely away with location services in the meantime.

It’s clear that Microsoft is gearing up for more Scroogling, and we think that’s kind of sad.  Bing is a good product, with lots of potential, and even a fairly healthy market share, at least until Marissa Mayer figures out a way to get out of the Bing/Yahoo! deal.   Why not focus on the product, or spend some of that Scroogle money on innovation instead of spin?