Among the number of announcements Microsoft made at last week’s Build, two stand out not only for their significance, but for their relationship.  For the first time, Microsoft is including the open-source graphics rendering javascript API known as WebGL, and at the same time, re-introducing Bing Maps 3D.  How are they connected?  Let’s take a look.

First, some background.  Microsoft has never included WebGL with Internet Explorer, even though it is an important part of other major browsers.  In fact, Microsoft took the time, back in June of 2011, to explain just why they considered WebGL “harmful” (short answer, security vulnerabilities).  Microsoft had just “killed” Silverlight a few months earlier at PDC 2010, and web developers weren’t left with many choices for their graphics intensive applications: an immature HTML5, Flash, or ignoring IE and going with WebGL.

Microsoft didn’t spend a lot of time in the Build keynote or in the IE 11 blog post talking about WebGL, only including a single paragraph in the blog post:

However, in a session run by Frank Olivier, Build attendees did get a deeper dive into IE’s implementation of WebGL (including a quick sneak peek at PhotoSynth 2, which occurs right at the beginning of the session and is well worth a look):

As Olivier says in the session, WebGL offers developers the chance to do “stuff you can’t really do anywhere else on the web platform”.

On to Bing.  At the Build Day 1 keynote, Bing VP Gurdeep Singh Pall showed off (alongside a number of other cool new features coming to the Bing Developer Platform), an upcoming set of controls for Bing Maps 3D: 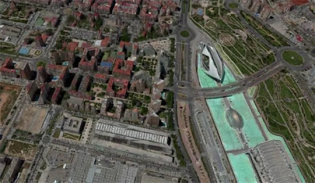 Now just as a refresher, 3D maps aren’t anything new to Bing, they existed for years as at first a standalone download known as “Virtual Earth 3D“, and then later as a Silverlight plugin to the classic Bing Maps, known as “Bing Maps 3D”.  That was shut down in November of 2010, as Microsoft made a hasty retreat from Silverlight.

Intrigued by this offhand mention of a new incarnation of Bing Maps 3D, I asked around a bit.  First, Bing Director Stefan Weitz told me that the new version was almost entirely built from the ground up, using, among other technologies,  Microsoft’s UltraCam.  There’s simply not much left from the old Bing Maps 3D, Silverlight or otherwise.  Then I had a chance to talk a bit about WebGL with Jason Weber, a PM on the IE team, who has been at a number of Microsoft events presenting on Internet Explorer.  He explained that Microsoft is using a custom implementation of WebGL, which sits on top of (well sort of) DirectX.  In fact, WebGL and DirectX share a lot of functionality (although DirectX, of course, is not open source, and not used by any other browsers besides IE): 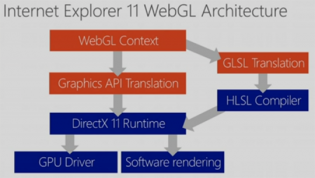 But it was after attending a Bing Developer session at Build, and talking to  Bing Maps Senior PM Johannes Kebeck that it all started coming together.  He told me that the new Bing Maps 3D would be coming not only to web developers in the form of Bing Developer controls for use in their apps, but also coming back to the web as part of Bing Maps.  However, Bing Maps 3D is based on, you guessed it, WebGL.

For the Bing Maps team to do stuff they couldn’t do anywhere else (including Bing Maps 3D and PhotoSynth 2), they needed WebGL.  It’s been nearly two years without a 3D mapping product from Microsoft, but now, finally with IE’s rebuilding of WebGL, we’ll be seeing some cool stuff not only from app developers, but from Bing Maps, as well.