Ever since its launch back in October last year, we’ve seen news about Windows Phone 8’s minor updates – called GDR releases (we expected there will be 3 of them) – but we haven’t heard much about the next major upgrade to the OS codenamed Windows Phone “Blue”, at least officially. Screenshots from early build was leaked earlier this year allegedly via a lost phone from a Microsoft employee, but details were scarce.

Today during the Worldwide Partner Conference 2013 in Houston, Microsoft’s Chief Operating Officer, Kevin Turner, revealed an interesting slide during his presentation. You can check it out below (courtesy of Mary Jo Foley): 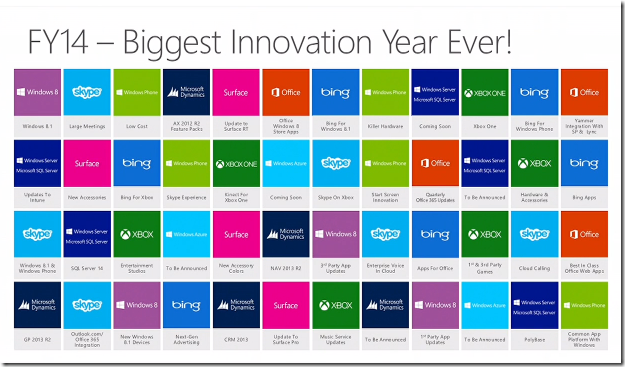 What’s interesting about this slide is that it hinted at some of Microsoft’s plans for the next major upgrade to Windows Phone. For those who couldn’t read the tiny text, we listed them below, together with some of our thoughts on what they could mean:

That is not all, as Microsoft also announced today that they will be releasing an “enterprise feature pack” for Windows Phone, which will bring the following new features:

Microsoft announced that the “enterprise feature pack” will become available in the first half of 2014, although it is not certain whether this will come as part of Windows Phone “Blue” or not. Additionally, the company also announced that the support lifecycle for Windows Phone has been increased from 18 months to 36 months, meaning you should be able to continue receiving updates to your WP8 device all the way until January 12, 2016 (subject to carrier restrictions of course).

What would you like to see in the next Windows Phone major upgrade? Let us know in the comments below!