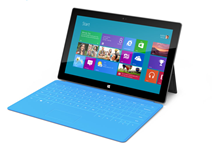 Microsoft’s 4th quarter earnings came out yesterday, and while the news was mixed, the big bombshell was news that Microsoft wrote down $900 million on poor sales of the Surface RT, and its subsequent price slashing. Chief Financial Officer Amy Hood explained in the Analysts call shortly after the news was released:

We reduced the price of Surface RT by $150 to $349 per device. As a result of this price change, as well as inventory adjustments for related parts and accessories, we recorded a $900 million charge to our income statement. While this resulted in a -$0.07 impact on earnings, we believe this pricing adjustment will accelerate Surface RT adoption and position us better for long-term success.

So it’s pretty easy to read at least a couple of insights into those two sentences. First, Microsoft made WAYYY too many Surface RTs. Second, they seriously thought they were going to sell a significant number at the original target price of $499 (plus another hundred bucks for a keyboard). Third, nobody believes that Microsoft is serious about RT, and fourth, and by far the most disconcerting, is that Microsoft is somehow oblivious to our observation #3, and appears to believe that dropping the price is going to save Surface RT.
Of course it isn’t. For whatever number of reasons consumers didn’t buy the Surface RT, price was only one of them. Microsoft confused the message by not explaining (or knowing itself) what RT was supposed to be or do, nickel and dimed the pricing by not bundling a keyboard with the Surface, and left the RT out in the cold with a lackluster assortment of apps for the new device. That included an appalling set of Microsoft written core apps that weren’t ready to ship as student projects, let alone as banner apps showing off the power of Windows 8 running on ARM. Oh, and throw in the confusion surrounding the Metro / Modern / what’s it called again? naming debacle, which again confused the message and made Microsoft look like consumer facing fools.

But the mistakes Microsoft made with the Surface RT ran a lot deeper than just marketing mistakes or hastily written apps. First of course, and as usual, Microsoft came late and lame to the game. The Surface might have stood a chance if it came out at the same time or a few months later than the iPad, but 2 ½ years and three generations late and it was game over from the start.

Microsoft made a bet, inexplicably, on ARM, and more specifically full-blown Windows on ARM, and at some point in the process found out that getting it to run wasn’t going to be so easy after all. What happened next was that the “no compromises” promise of Windows 8 turned out to be, in fact, full of compromises. Windows applications wouldn’t run at all, except that you were constantly and jarringly thrown back into the Windows desktop. Battery life was good, but performance was choppy, at best, another compromise. If Windows on ARM had been like the modified version of XP that ran on netbooks, that is, a simple solution putting Windows on all those cheap Android tablets, maybe it might have made some sense, and maybe that was in the original thinking. Instead, Microsoft wound up with an overpriced, underpowered prototype with an ecosystem that was going nowhere, fast.

It’s an open secret that Microsoft is moving toward having a single app system for both Windows and Windows Phone, but until that happens, counting on popular and interesting apps to show up on “Metro” is a fool’s bet. Microsoft trained their cadre of developers and their fans not to count on any app development platform to stick around for long. .Net?, Silverlight?, XNA?… these technologies suddenly appeared to be shipping with the question marks attached, and we’re supposed to get behind an app system that Microsoft can’t even be bothered to name?

Microsoft’s stock is tanking since the quarterly report was released yesterday, down some 11% in just a few hours. Yet it’s interesting that Microsoft would take such a big hit and blame it so prominently on a single product (Microsoft pointed the finger directly at Surface RT, and not at Surface itself). Any random passerby could have told you the Surface RT wasn’t going to stand a chance in a market already dominated by the iPad. The thought that Microsoft blew through nearly a billion dollars on it in less than a year should be enough to send the stock spiraling downward. Still, it’s interesting that Microsoft was so eager to clear the books so early. While Surface GM Brian Hall says Microsoft remains committed to the RT, taking the hit now means the books are clear for a newly reorganized Microsoft to move forward, without the baggage of a Sinofsky led battle over who controls the operating systems for new devices, and operate as One Microsoft.

A tough day at the office for Microsoft stock watchers who have been quietly giddy as the stock as inched up to over $35 in recent days, and a reality check for anyone who believed Panos Panay’s BS about the magical Surface RT.