Are you having problems accessing Outlook.com, SkyDrive? You’re not alone, as Status.live.com is reporting “technical difficulties” for services “such as Hotmail, Messenger, and SkyDrive”: 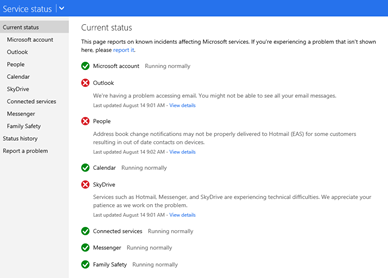 The problems (which we don’t seem to be having here) were reported at 9:01am (PDT – GMT -8), and the Status page promises an update by 11am. Are you affected by the outage? Any problems accessing your email or your SkyDrive?

update:  The problems began at 6:49am, according to Status.live.com, and although an update was promised by 11 am, and the SkyDrive status has been updated to “resolved”, there has been no change in the status of Outlook.com or People.

We’ll keep you posted as Microsoft works through the “technical difficulties”.