Financial Times first reported back in April that Nokia plans to introduce a “phablet” to its Lumia range, and only a few weeks ago The Verge confirmed that the device is codenamed “Bandit” and will come with a 6-inch display. Twitter user @evleaks noted yesterday that the final name for “Bandit” may be Nokia Lumia 1520. Today, the first photo of the Lumia 1520 has leaked via WPCentral, check it out below: 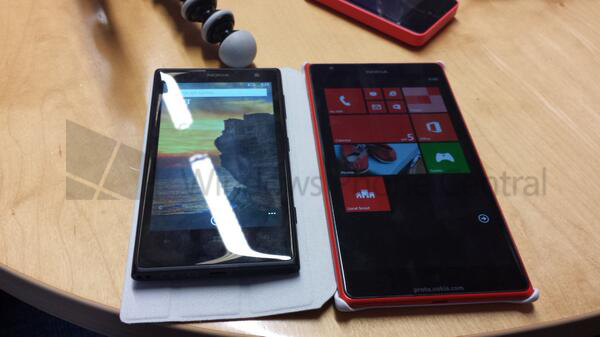 The photo above shows the Nokia Lumia 1520 (right) compared against the Nokia Lumia 1020 (left), and you can see the size difference. The device is made of polycarbonate, and it appears that a case/cover accessory may be available for the device at launch. The photo appears to match the leaked image of the display component that was reported earlier in July, with a similar-sized bezel, logo position, and sensor locations. The photo also shows the new Start screen layout for 1080p devices in the upcoming Windows Phone 8 GDR3 update, with the ability to arrange three columns of medium-sized tiles in one row.

Previous reports of the Nokia Lumia 1520 indicated that it will come with a 6-inch 1080p display, quad-core Snapdragon processor, and a 20MP camera. It is expected to be announced in September next month and available on AT&T in the US by the end of the year.