Xbox Music updates with iOS, Android apps and free music on the web (but what about Nokia Music?)

Microsoft just announced a new set of updates for Xbox Music, including the release of basic apps for both iOS and Android, an expansion of Xbox Music’s web based music player, and news of more to come. Meanwhile, we’re still waiting for either Microsoft of Nokia to say anything more about the fate of Nokia Music. More on that in a bit, first, the Xbox Music news.

According to a blog post on the Xbox Wire, apps for both iOS and Android are now available for download from their respective app stores. The apps offer “basic access to music, with the ability to sync and change playlists, but no offline functionality to play songs without an internet or data connection”, according to a post on The Verge, and GigaOm says that a “cloud locker” (read: SkyDrive) service may be coming, too:

Speaking of which: Amazon, Google and Apple all offer their customers some kind of cloud locker to store previously purchased music, including tracks they have ripped from CDs. Microsoft now wants to take yet another cue from those offerings and eventually add a locker like this to Xbox Music as well.

Officially, what is coming later is Radio (which used to be Smart DJ) for both the iOS and Android apps and the web, and a new Web Playlist feature for Windows 8.1, coming at launch:

Web Playlist. A new Web Playlist feature is built into the Xbox Music app for Windows 8.1. The tool scans for artists’ mentions on a given Web page and creates a custom playlist of their music. Think about the Web page of your favorite radio station, or an upcoming music festival, and all the bands and songs included on that Web page.  Web Playlist identifies all that music and creates an instant, custom playlist inside Xbox Music with the simple touch of a button. We’ll release Web Playlist along with Windows 8.1 on Oct. 18.

Along with Web Playlist, Xbox Music will be baked into Bing Smart Search for Windows 8.1, too:

Bing Smart Search. Xbox Music is integrated seamlessly into Bing Smart Search for Windows 8.1. Using Bing Smart Search, you can find musicians, bands and artists presented in a rich field of content, including top songs, albums, videos, images and relevant Web pages. If you select a track from the song list in the Bing results, it will immediately begin playing in the Xbox Music app. By collaborating with the Windows and Bing teams, Xbox Music on Windows 8.1 will make it easier than ever to find tons of great info about your favorite artists and instantly listen to the music you love without backing in and out of apps.

The web based version of Xbox Music, at music.xbox.com, now offers free music streaming, at least for the next six months, after that it will be limited without a paid subscription (Xbox Music Pass). Music streaming is free on the Windows 8 Xbox Music app still too. For the iOS and Android apps, it sounds like you’ll need an Xbox Music Pass to stream music, at least until the Radio feature comes to the apps and the web. 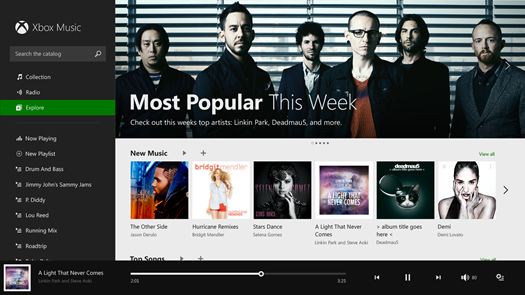 OK, on to Nokia Music. When Microsoft announced its intention to purchase Nokia’s phones businesses, we among others wondered what that would mean for Nokia Music. Neowin.net asked, and got the following response:

Nokia Music is part of the Smart Devices business and hence part of this deal. It’s business as usual for the near term as the agreement was only announced on Tuesday, and the closing is expected to take place in Q1 2014. As the closing of the deal approaches, we’ll be able to share more information on future plans.

Neowin took that to mean that Nokia Music is “to be acquired by Microsoft”, but according to Nokia via Mary Branscombe, that’s not what was said:

@kipkniskern @dereklakin @samsabri @tromboneforhire I asked Nokia about that story too; they re-iterated they have NOT announced who gets NM

So, as usual, we’re left to wonder. Since the stories came out that Nokia was very reluctant to part with Maps, we wouldn’t be surprised if they’re planning on holding on to Nokia Music, too, or trying to, at least. Nokia Music could offer Microsoft music licensing access in a number of markets that currently Xbox Music doesn’t reach, which could be important as Microsoft moves into emerging markets with its acquisition of the Asha brand of Nokia phones and the low end Lumia phones. Will we see Nokia offer the same sort of deal they hammered out for Maps, with Nokia ownership and a deal giving Microsoft access to the worldwide licensing? Or will Microsoft really wrest Nokia Music away and incorporate it into Xbox Music? Do you prefer Xbox Music or Nokia Music, or does it matter?