Yesterday Microsoft released Windows 8.1 RTM to MSDN and TechNet, and thanks to our MVP status and complimentary subscriptions we were able to download and install the new bits. We went ahead and just installed over Windows 8.1 Preview, with no noticeable ill effects, but note that this is not supported, and you’re better off paving your machines and doing a fresh install if you’ve been using the preview.

This isn’t a full review or teardown by any means, but there are some immediate differences between RTM and Preview that jump out. Of course Skype is now built in, and seems to be missing some of the quirks of the earlier versions. There’s still no Facebook integration, and the “app” still works pretty much the same way that Skype for Windows 8 works: you still have an app icon on the Start Screen, which opens Skype. We’re not big Skype users, except for IM, and so not too keen on what exactly is different, but the app seems more responsive and smoother.

But there are some noticeable differences in some of the other “core apps” that ship with Windows. First up is Mail:

As you can see, the sidebar on the left has changed significantly. First off, it’s now “Outlook.com blue”, with no apparent way to change the color, or much of anything else about the look of the sidebar. However, there are some changes to what’s shown on it. Included in the list of icons are two new ones, “Newsletters”, and “Social Updates”. These are the familiar “Sweep” cleanup filters from Outlook.com, but they’ve been built in to Mail, and without doing anything, your inbox separates these two categories into special folders.

You can turn off the behavior in the settings section: 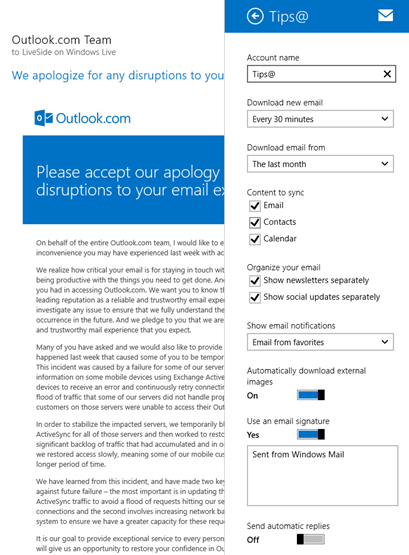 Building in Newsletters and Social Updates Sweep into Mail is a nice touch: they’re probably by far the most used Sweep filters, and now users don’t have to do anything to get them set up.

The sidebar also includes a new Favorites section, where you can choose people and have their emails show up in a separate view, and changes to the Folders section. In the previous Mail app, Folders and subfolders were just shown as a list in the sidebar, but now there’s a Folders icon, which you click on to see your list of folders. Once you do that, however, you can “star” folders, and they then show up in the main sidebar: 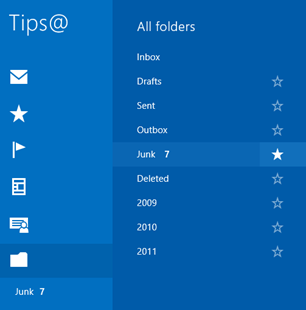 You can even Pin folders to the Start Screen, by going to Manage Folders at the bottom left of the lower task bar: 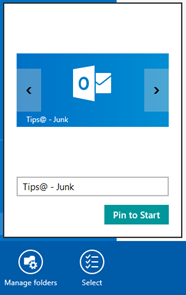 From the Manage folders menu you can also create folders or subfolders, or empty them or mark as read.

Calendar has a few new features, too. First up and most noticeable is a new “What’s next” view, which gives you a quick look at the next few days: 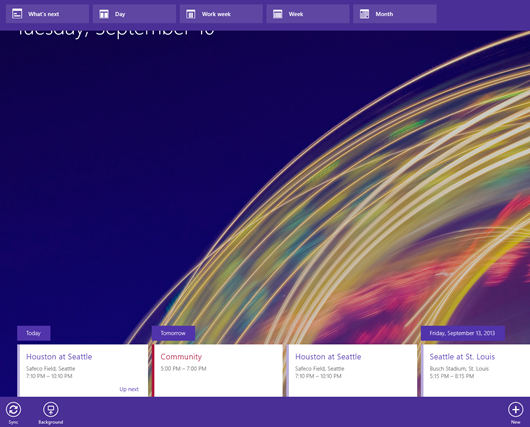 When you first open Calendar you get the What’s Next screen, with the three little “more” dots in the top right corner. Clicking on those gives you this view, where you can switch between day, week, and month views, and back to What’s Next.

There are also a number of changes in PC Settings, moving things around and splitting Metered Connections settings so that you can turn off SkyDrive uploads only when on a roaming metered connection, for example.

What are your favorite improvements to Windows 8.1 RTM? What are you most looking forward to?