On Xbox One day, are you feeling better about Microsoft?

Last night, my friend PicturePan2 (he’s here for this week’s MVP Summit, where we’ve been all week) and I headed back to Bellevue to witness the Xbox One Launch at the Bellevue Square Microsoft Store. Bellevue wasn’t one of the premier launch locations, but there were still a LOT of people lined up to either pick up their pre-ordered Xbox Ones, or hope to pick up a day one device without a pre-order, or, like us, to just check out the scene. We didn’t get any Steve Ballmer appearances (although we hear he checked out the Bellevue Best Buy “store within a store” earlier in the day), but it was still fun to be around a bunch of pretty happy people pretty excited about their new Microsoft devices.

Microsoft has generated a lot of excitement for the Xbox One launch, the first really new console since perhaps Xbox 360 launched in 2005, and with 80 million current Xbox owners, sales are almost guaranteed to be brisk, and Microsoft and Sony are going to be battling it out for who sells the most devices for the next few months and beyond. Microsoft surely has a hit on its hands with the Xbox One – no, it’s not a PS4 killer, but it will sell well and hold its own at the very least. What remains to be seen is how Microsoft continues to battle for supremacy in the living room. We doubt, with competition coming hard from the cable companies and TV manufacturers, that $500 consoles are the answer for controlling media for most living rooms. Microsoft still hasn’t come out with the killer controller for the masses, although there are elements in Xbox One that could see them heading that way. 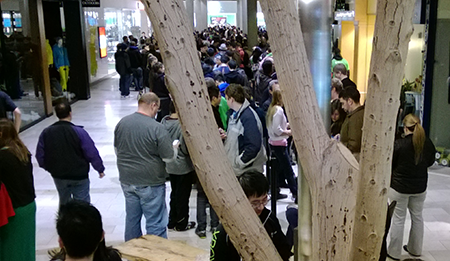 The line outside the Microsoft Store in Bellevue at about 11pm last night.

But still, and maybe we’re flush with enthusiasm from the MVP Summit (we can’t reveal much of anything we heard there, except to say that in contrast to the dark years of the Sinofsky regime, we definitely DID hear some very interesting news about what’s in the pipeline), and excited to see a mall full of people waiting til midnight to get their hands on a new Xbox One, but there’s something about Microsoft’s position that just feels more hopeful. Tom Warren noticed it with Windows Phones in a post on The Verge, asking if Microsoft is “turning a corner“, and from Bing to Windows Phone to stock price to branding to reorganizing their company, Microsoft just isn’t quite the whipping boy it has been in recent years. 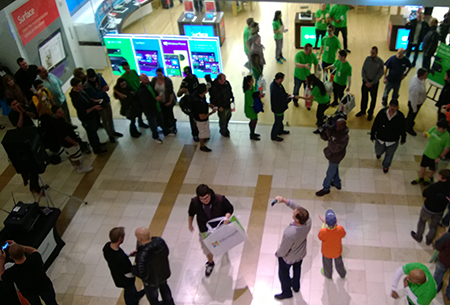 A new CEO is going to go a long way in making Microsoft relevant again (or at least to appear more relevant in the eyes of the tech press and the tech community – some would argue that with its billions and billions of dollars Microsoft has been very relevant all along), as are a “kinder, gentler” set of executives running the company, from Terry Myerson to Julie Larson-Green to Qi Lu and Tony Bates, and a new Xbox One console will be able to generate the kind of excitement about consumer offerings that Microsoft needs to build on. Can they deliver? Is Microsoft really “turning a corner”, or are we just a bit flush with excitement? How are you feeling about Microsoft as it moves in to perhaps its most important period in its 30 year life? 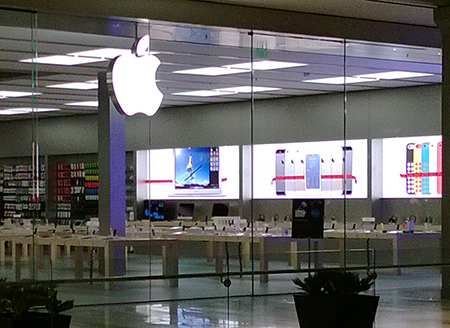 The Apple Store upstairs, looking a bit forlorn (ok, it was closed. Still, we couldn’t resist)