Following Nokia World in October last month, the Nokia Lumia 1320 and 1520 are likely to be one of the last Windows Phone devices to from the Finnish handset maker. We have the Lumia 525 and 526 which were just launched yesterday, and the Lumia 929 that is expected to hit Verizon stores in the US soon, these devices marks the end of the Windows Phone 8.0 era. But what’s coming next is more exciting – as we’re starting to hear details about the next iteration of devices running Windows Phone 8.1 (“Blue”) coming in early 2014.

Recently, Twitter user @evleaks unveiled codenames for two new upcoming Windows Phone devices from Nokia – “Goldfinger” and “Moneypenny”. According to The Verge, Nokia “Goldfinger” will be the flagship device out of the two, and is said to come with a new technology that had been in development over the past few years called “3D Touch”. Similar to Air Gestures on the Samsung Galaxy S4, “3D Touch” will use hardware sensors to enable users to interact with the device by making hand gestures – such as scrolling and flipping – above and to the side of the device without touching the screen. A previous patent from Nokia appears to describe examples of how this will work: 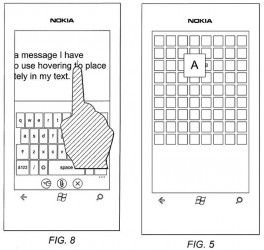 Hover based Text / object enlargement while reading or UI interaction. The letter or part of the word you hover on will get enlarged making it easy to read. This will also help in rendering touch inputs more easily.
Hover base handling of text input and icons. There will be three modes while using the keyboard to input text and once hover is done, the user enters into Zoom-pan mode from normal mode, where the part of text under hover gets zoomed in and also the text panning takes place based on movement of the hand. As soon as one touches the screen the device enters into pointing mode and hover interaction ceases. It may make text input really a breeze.

Twitter user @evleaks also revealed that for Nokia “Moneypenny”, a dual-SIM version will be made available, indicating that the device is targeted at the lower end market, such as China and India, where dual-SIM devices are highly sought for.

Both devices are expected to be one of the first Windows Phone 8.1 devices, which is set to come with a notification center, actionable notifications, and a Siri-like personal digital assistant codenamed “Cortana”. It appears now that Windows Phone 8.1 will also support dual-SIM devices, given the user interface changes required to support switching phone functions between the two SIMs. The Verge indicated that Microsoft is planning to unveil Windows Phone 8.1 at Mobile World Congress 2014, scheduled to begin on February 24, 2014.