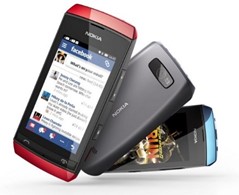 The Android on Nokia story, which has been percolating ever since word first leaked out about a Nokia “Normandy” device, boiled over yesterday with a Wall Street Journal post reporting that Nokia is indeed planning to announce a Nokia device running Android at MWC (Bloomberg today says it’s more than one device, in fact). Nokia’s move to Android could be as a replacement for the OS on the Asha line of feature phones, which currently run a version of Nokia’s proprietary S40 mobile operating system. While the Wall Street Journal does not come right out and confirm that, they do hint at it:

Another reason for the Nokia Android phone is Microsoft’s Windows Phone—currently the only operating system on Nokia’s higher-end Lumia smartphones—doesn’t work on low-cost phones because of the software’s technical requirements.

Mary Jo Foley goes a bit further in her post on the subject:

In another blog post spurred on by the Wall Street Journal post, Hal Berenson also reasons that Asha could be ripe for an Android makeover, and that it might not be so bad for Microsoft:

So Nokia is introducing Android as an S40 replacement, or so it seems. Whether that was part of a move to get Microsoft to soften its stance on tech requirements for the Windows Phone OS, a ploy to get Microsoft to buy the phones business to stop Android from happening (Berenson points out that if Asian regulators would have approved the MS/Nokia deal, Microsoft might have been able to quash the Android phone altogether), or a serious attempt to modernize the Asha line, the point is that from all indications a Nokia Android phone is about to happen.

“Microsoft needs products for the low-end market and current Windows-based phones are not suitable for that because they are too expensive,” said Hannu Rauhala, an analyst at Pohjola Bank in Helsinki.

Microsoft isn’t planning to build a long-term strategy around Android devices, one of the people said. Rather it may be planning to use the Nokia Android phones to bolster its sales in the lower end until it can produce Windows phones for that market segment, the person said.

If Microsoft does indeed need Asha to move their devices and services strategy forward, then running it on Android may make the most sense. But rather than bolstering the Asha brand with Android, we wouldn’t be surprised to see Asha, and not just Asha on Android, have a short life at Microsoft.