Tomorrow, new Microsoft CEO Satya Nadella is expected to unveil the next generation of Surface devices, and mark his 112th day on the job, by our count. It’s a good mark for the beginning of Nadella’s transition from his self-imposed “first hundred days” of meeting with customers, partners, and employees, and a good place to begin to evaluate how Nadella is doing, and will do, as the third Microsoft CEO.

Recently, a number of publications have published a series of somewhat glowing reports on Nadella and his leadership, with most of them singing the praises of Nadella as having “changed the company”. In Forbes, twice, at The Business Insider, at Computerworld, and elsewhere, the spin seems to follow the same path: Nadella has taken a somewhat stagnant Microsoft and breathed new life into it with a series of bold moves that his predecessor would never have taken. That’s the spin, anyway.

It’s certainly true that the CEO change has been both a wake-up call and a breath of fresh air. Nadella’s style is sufficiently different from Steve Ballmer’s as to be a refreshing change, and his focus, less on the bottom line and more on moving technology forward, are welcome and necessary changes.

What’s interesting is the credit Nadella is getting for a series of moves that Microsoft has made recently, moves that have surely been in planning for months if not years. Office for iPad was far less about a bold new leadership direction and far more about working out a way to offer Office on iOS while satisfying Apple’s draconian 30% off the top rules. Of course offering Office on the iPad made sense, but why would Microsoft hand over 30% of every Office 365 subscription sold via an Apple device? In the end, Microsoft decided to push Office 365 hard everywhere and accept what turns out to be a few lost subscriptions, but that decision was made long before Nadella became CEO. The timing of the announcement may have been delayed to coincide with Nadella’s appointment, but we highly doubt that it was his idea alone. Microsoft, even in its fastest moving moments, doesn’t move that fast.

Other moves, too, while credited to Nadella, seem to have much longer roots. He certainly can’t take credit for the wishy-washiness of Xbox. Microsoft was waffling back and forth on the Xbox One long before last week’s backtracking on the inclusion of Kinect with the Xbox and requiring Xbox Gold memberships to take advantage of premium content from third party sources like Netflix. Changes to Windows 8 and Windows Phone, both to make them more compatible with each other, and to make Windows 8 easier to use with a keyboard and mouse, were in planning long before February, and while Nokia’s Android “X” device continues to be a head scratcher, that cat was let out of the bag before Nadella, too, as were any decisions to continue on with Android development.

That isn’t to say Nadella hasn’t accomplished a lot in his first hundred days. There is a new attitude around Microsoft, although judging by this past year’s stock price rise (after bottoming out last July with a less than stellar 4th quarter earnings and a nearly 1 billion dollar writedown related to Surface), news that Microsoft was making changes propelled the stock advances more than anything Nadella has specifically done: 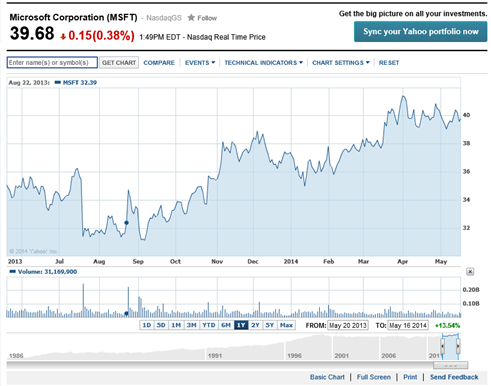 Nadella has refocused the company on a “cloud-first, mobile-first” strategy, and has made some small but significant changes to his senior leadership team. But as much as the headlines would lead you to believe otherwise, Nadella hasn’t… yet… had much of a real effect on the company. Microsoft is still moving at a snail’s pace in a world where large company acquisitions are changing the tech landscape almost daily, is still middle management heavy, is still far behind the market leaders in search and mobile, and is still (and probably rightly so) seemingly content to live off its laurels in Office and Windows and Enterprise software, raking in the money and laughing all the way to the bank.

Tomorrow Microsoft will unveil at least two new Surface devices, at least one priced so high that only the bean counters at Microsoft will be happy. In just a few weeks, the Xbox One will stumble into E3, and sometime this summer we’ll get our first glimpse at what a Microsoft-owned Nokia phones business will look like. We’ll also start to get our first real indications about how well Nadella will do as CEO, on his own, without a well prepared script for the pundits to follow. Only then will we begin to see the real, post-Ballmer, Microsoft.