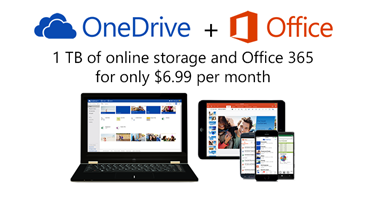 Yesterday, Microsoft announced some significant changes to OneDrive, upping storage to 15GB from 7GB, free to all users, and upping Office 365 users 1TB of storage per person with any Office 365 account. Additional storage prices have also dropped, and an extra 100GB will now cost you $1.99/mo (down from $7.49), with 200GB of extra storage now costing #3.99/mo, down from $11.49.

Although we’re still waiting for Microsoft to improve the service itself, these changes are more than cosmetic improvements. As Ed Bott notes, they mark a serious challenge to the likes of Dropbox and Box, as cloud storage becomes a feature rather than a product, and Microsoft can offer seamless integration with Office and Windows, along with these new storage limits, to offer what those other services can’t.

Where Microsoft still lags in is non-document file management. Although it had been rumored for years, we’ve yet to see a true “OneDrive music player”, or a cloud based photo editor. Microsoft has tried numerous times to create a Photoshop-like editor experience, all without much success, but the truth is that for the vast majority of non-business consumers, photos and music take up not only the bulk of their storage needs, but also their most valuable experiences. Not everyone is writing the next great novel, but everyone is taking pictures, listening to music, and increasingly, capturing video. The need to manage, share, and collaborate with these types of files is still the consumer’s greatest need and Microsoft’s biggest challenge.

In addition, it’s still an iPhone/Android dominated world, and while Microsoft has made great inroads in its cross-platform endeavors, there’s still lots of work to do, and evidenced by some comments in yesterday’s OneDrive Blog post:

Its too bad the OneDrive for OS X app sucks or I’d actually use this. Its a complete afterthought. MS needs to up their game on other devices. I think its happening under their new CEO, just taking some time.

Yep, we need to up our game on our Mac client. It’s very important to us, so rest assured it’s a priority.

Are you satisfied with your OneDrive experience? Does it measure up to what you get from other services? What would make OneDrive a better experience for you?

(As you might have noticed, I’ve been on a bit of hiatus recently. For the last 8 years, I’ve spent nearly all my waking hours following Microsoft news in some form or other, and it was time for a break. LiveSide continues on, though, although perhaps in a slightly different form, more on that later. For now, it’s good to be back.)