A few more updates came as part of today’s Windows Live update (version 16.2). One of this includes Windows Live Profile, which received some clean-up to its Connected Services page. Services that you connected through Live Connect no longer shows up here, however, one particular service makes a come back to this page – Twitter. Check it out below: 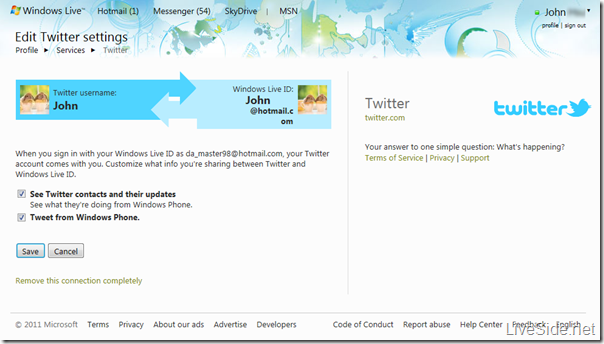 Twitter integration with Windows Live was removed back in June 2010, due to policy changes made on Twitter’s end, and Microsoft unable to reach an agreement with Twitter since then to make it available again. However, with the release of Windows Phone 7.5 “Mango” update, Microsoft was able to get Twitter connected back to Windows Live again, however this functionality was limited to Windows Phone. As shown in the screenshot above, this situation hasn’t changed, and you can only tweet and receive other’s tweets on your Windows Phone, as well as integrating Twitter contacts with your phone’s contact list. However, this new page now allow you to manage this connection directly via Windows Live, rather than having to manage it on the phone only.

Here’s hoping that Microsoft will really bring Twitter back to Windows Live, allowing you to tweet and see service updates directly via Windows Live. Furthermore, the way Windows Phone de-duplicate and integrates Twitter contacts with your Windows Live and Facebook contacts works really well too, and we hope this could come to the actual Windows Live service real soon. With Windows 8 around the corner, which will tightly integrate with Windows Live Contacts within the operating system, it would only make sense to bring the most popular micro-blogging service back to the table.

If you have already linked Twitter to Windows Live on your Windows Phone, you can manage this connection by going to https://profile.live.com/services.