I was using SkyDrive earlier and decided that I should probably tidy it up now it’s so easy to move folders around following the most recent update. I went about selecting various folders that only stored photos to move them to a new folder and when I clicked “move” the dialogue box that popped up was interesting. 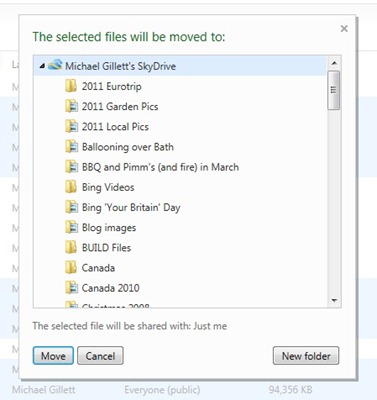 At first glance this image isn’t interesting. However, I wondered if there were any locations on offer other than “Michael Gillett’s SkyDrive” so I collapsed it. And was presented with the below list. 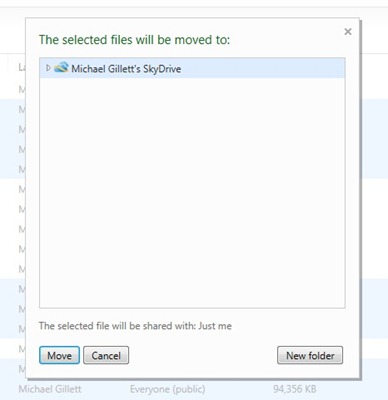 Again not a very interesting view, but I then asked myself why would Microsoft let me collapse “Michael Gillett’s SkyDrive” if that is the only place I can store things. This has got me wondering if there will, at some point in the future, be other places that users can move and indeed store files and folders.

This perhaps becomes more interesting when we consider that Windows Phone 8 might run on Windows 8 and so too the next Xbox. If SkyDrive is to be integrated into Windows 8 then SkyDrive (in the browser) could allow a user to manage all their files and folders on any of their devices from a single location. That would be excellent.

My only doubt with this train of thought is that I’m not entirely sure where Mesh fits in. What are your thoughts on this? I fear I might be reading far too much in to this but I do wonder why I can collapse “Michael Gillett’s SkyDrive” if it is the only place I can save things.