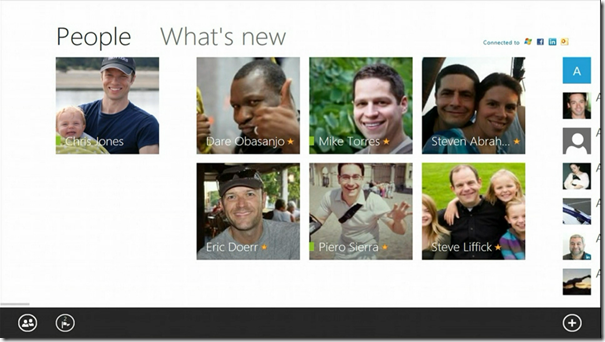 With Windows Phone 7.5, Microsoft decided to make it as the most people-centric phone on the market. On Windows 8, Microsoft is trying to extend this idea of a “People”-centric hub, where you can view all the details, photos, and other updates of all the people you care about all in one place, and turn it into a full-blown Metro-styled app that works on PCs and tablets. Upon launching the People app for the first time. provided you have signed in with your Windows Live ID, you’d be presented with the option to connect other social networks to your account, if you haven’t done so already:

As shown in the screenshot on the left, you can pull all your contact information from Facebook, MySpace, LinkedIn, Twitter, Exchange, as well as any other accounts that supports Exchange ActiveSync (such as Google and Yahoo!). Once you have connected all these accounts together, Windows Live will do all the contact de-duplication work for you, similar to how it works today, but at the same time you’d also be able to manually link contacts together (if your contacts decided to have different names between two social networks).

To cut through the clatter, you’d be able to “favourite” your contacts that you care the most about, and that will make them featured at the start of the People app. You can even "pin” contacts to your Start Menu such that they appear as a Live Tile, which will display notifications and status updates from these contacts. To search for other contacts, you can also navigate through the entire contact list by alphabetical order, or use the Search Charm on Windows 8 to quickly find the contact you want.

Upon clicking into an individual contact, you’ll be presented with three pivots: Profile, What’s new, and Pictures – very similar to the People hub on Windows Phone. The “Profile” pivot shows all the details about this contact, including their email address, contact number, home address, birthday, and work details. This is also the launch pad to initiate communication with the contact, which will start the respective apps such as Mail, Messaging, and Bing Maps. The “What’s New” pivot will show all the status updates and feeds related to that contact from all the social networks that you have connected to Windows Live. This could be Facebook, Twitter, LinkedIn, MySpace or Windows Live, and where supported, you can also “like”, comment, or reply/retweet to these updates. The “Pictures” pivot looks very similar to the thumbnail view in Windows Live SkyDrive, which will pull all the albums the contact has uploaded onto SkyDrive or Facebook, and also all the photos the contact was tagged in. 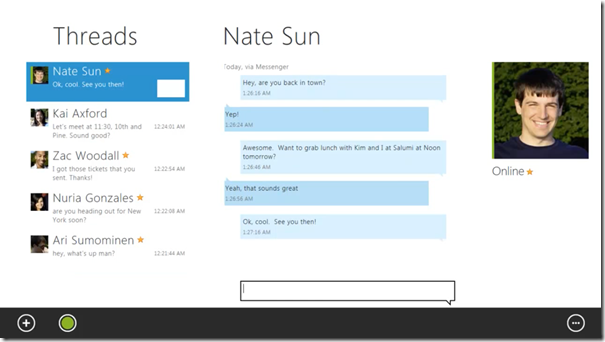 The Messaging hub looks to replace the text chatting capability of Windows Live Messenger. According to Chris Jones on the official blog post, [Messaging app] keeps track of all of your IM conversations across Messenger, Facebook, and other connected IM networks. We’re not so sure what “other connected IM networks” there is (Skype?), but this definitely sounds like a good thing. Judging by one of the screenshots from the People app above, it seems like messaging via SMS is also supported. Just like Windows Phone’s Messaging hub, this app uses the idea of “threads” which allows you to continue a conversation with a particular contact regardless of which IM network they’re on, as long as they’re available.

Looking at the app bar in the screenshot above,  you can also start a new conversation and change your online presence within the Messaging app. We’re not sure what the last button does, which we believe will pull up a menu for additional actions or switching IM networks.

The Messaging app also integrates well into Windows 8. The app’s Live Tile will display any recent messages received, as shown on the right. The unread messages count will also appear on the lock screen, alerting you to any new messages received while your PC was on standby. We assume the app will also provide notification alerts too whenever you receive a new IM, similar to Windows Phone, but we haven’t seen any of that in the demos shown at BUILD yet.

So at the beginning of this post, we said that the People and Messaging apps looks to replace the functionalities of Windows Live Messenger. We’ve seen the People app taking care of the contacts management and social network features of Messenger, and we’ve also got Messaging app providing IM and text chatting functionalities. However, one important area of Messenger was not covered by these two apps – the ability to have voice and video chat. 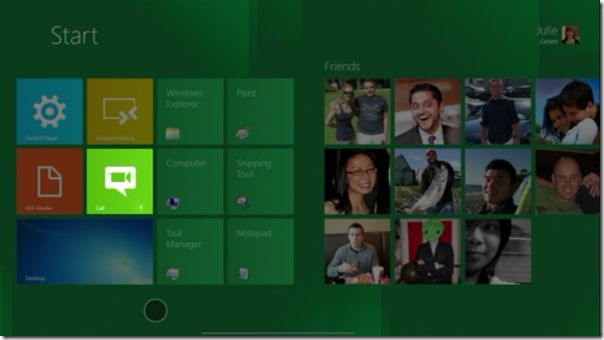 The Call app was never demoed or officially acknowledged by Microsoft. However, traces of clues can be found in various places. As shown in the screenshot above, we saw evidences of the Call app first on the Windows 8 Start screen as demoed during the BUILD keynote. 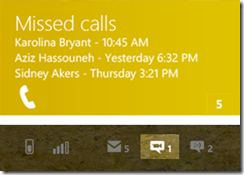 Then later on as spotted by Long Zheng, we also saw an expanded Live Tile showing the number of “Missed Calls” during a BUILD session on tiles and notifications, as shown in the screenshot on the left. This Live Tile showed the number of missed calls on the bottom right corner, as well as the person and time of call for the last three callers. Furthermore, on the Windows 8 lock screen, we also saw a notification icon which matches the Call app’s icon shown on the Start screen, possibly also showing the number of missed calls.

Long Zheng also noticed that within the People app, users are given the option to call a mobile number from the app, as shown below, further suggesting that Windows 8 will provide calling capabilities: 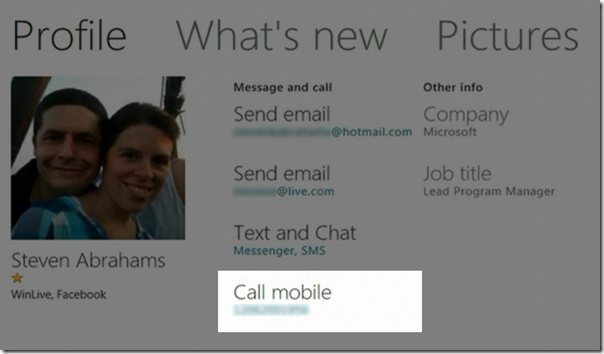 Indeed, looking at the WinRT documentations, we also found API references to voice and video calling capabilities for Metro-styled apps. Now what we’re not sure is whether this is simply voice and video calling over Windows Live network, or would it support other networks such as Facebook Video Chat, Lync, or even the recently-acquired Skype? We’ve previously seen references to a codenamed “Chatter” application in a leaked build of Windows 8, as well as hints of web-based video chat coming to Windows Live, could these also be related to the Call app on Windows 8?

So now we’ve taken you through the Windows Live-powered Mail, Calendar, People, Messaging, and Call apps. In the next part, we’ll take a closer look at SkyDrive integration in Windows 8, and how it’ll play a part in the upcoming SkyDrive changes. Before then, let us know in the comments below what you think about these Metro-styled desktop communication apps powered by Windows Live.