Following the multitudes of leaks of the Nokia “EOS” device last week, showing its impressive 41MP PureView camera mounted on a polycarbonate body, Nokia is finally ready to officially unveil the device to the public next month. The company has sent out invitations to the press for an event titled “Zoom. Reinvented.” to be held on July 11, 2013 at 11am in New York City. Check out the invitation below, courtesy of Engadget: 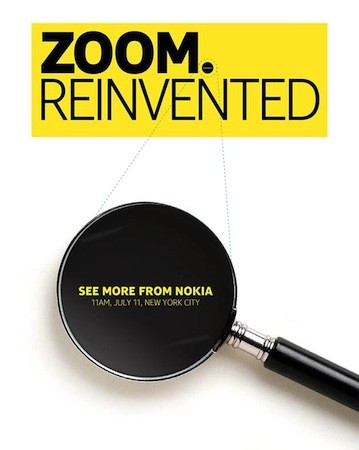 We already know quite a bit about the Nokia “EOS” device based on previous leaks, including a 4.5” AMOLED display with WXGA resolution, 41MP PureView Carl Zeiss camera with Xenon flash, focus assist light, and automatic lens cover (with photos taken at a maximum of 34MP), wireless charging supported via a cover, as well as a Nokia Pro Camera app for customisable manual controls for the lens. The images leaked of the device also shows that the device is very similar in appearance to the Nokia Lumia 920, but with a different camera module at the back to house the 41MP camera.

What’s also interesting is that previous rumors suggested a launch date on the second week of July, which matches exactly with what we have now. We expect the Nokia “EOS” to be made available on AT&T in the US and worldwide by summer this year.